As our name suggests, the foundation of Moedhart lies in choosing from the heart. A seemingly simple philosophy, yet a practice many of us find ourselves far removed from. In an age when intuition is commonly overruled by rational thinking, we believe it takes both courage and a sensory reawakening to connect with ourselves on the deepest of levels. To trust in the wealth of knowledge we already possess. To go with our gut. For us, the indigenous art of Canada’s Northwest Coast is a portal to a world guided by inner wisdom, rich in symbolism that has inspired humankind throughout our existence. While reminding us of stories so primal and universal that we can place them in the context of our own lives.

Our gallery is a space where Native art is central to self-exploration. Within its walls you are encouraged to discover artwork both from the perspective of its creator and in the realm of your personal experience. We invite you to seek out the piece of art that opens both your heart and your world.

The minds and hearts behind the art

More about the artists

We invite you to visit our gallery and seek out the piece of art that opens both your heart and your world. Curious about our collection? View some of the art online!

The company name is a contraction of two Dutch words ‘Moed’ (courage) and ‘Hart’ (heart). For us, it means having the courage to follow your heart. In the Dutch language, however, phonetically it also sounds like two very different words: ‘Moet’ (you must!) and ‘Hard’ (harsh). You can’t really hear the difference, but the way the words are written differ and, more importantly, the words have almost opposite meanings.

We believe in the ‘Moedhart’ approach. 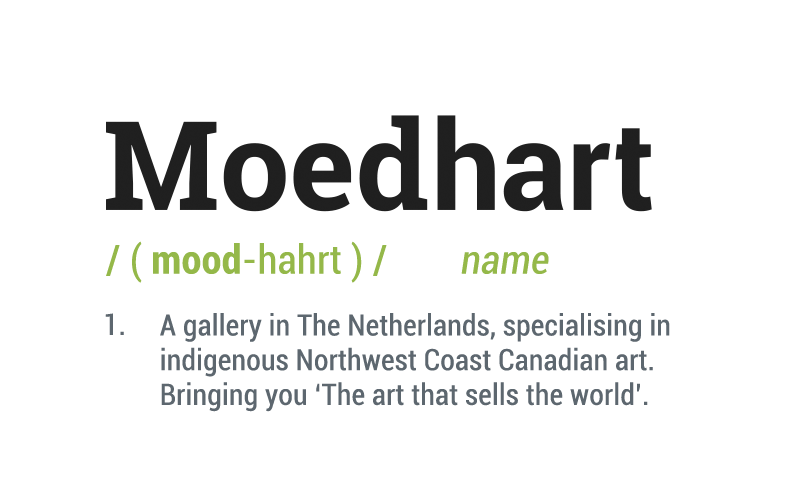 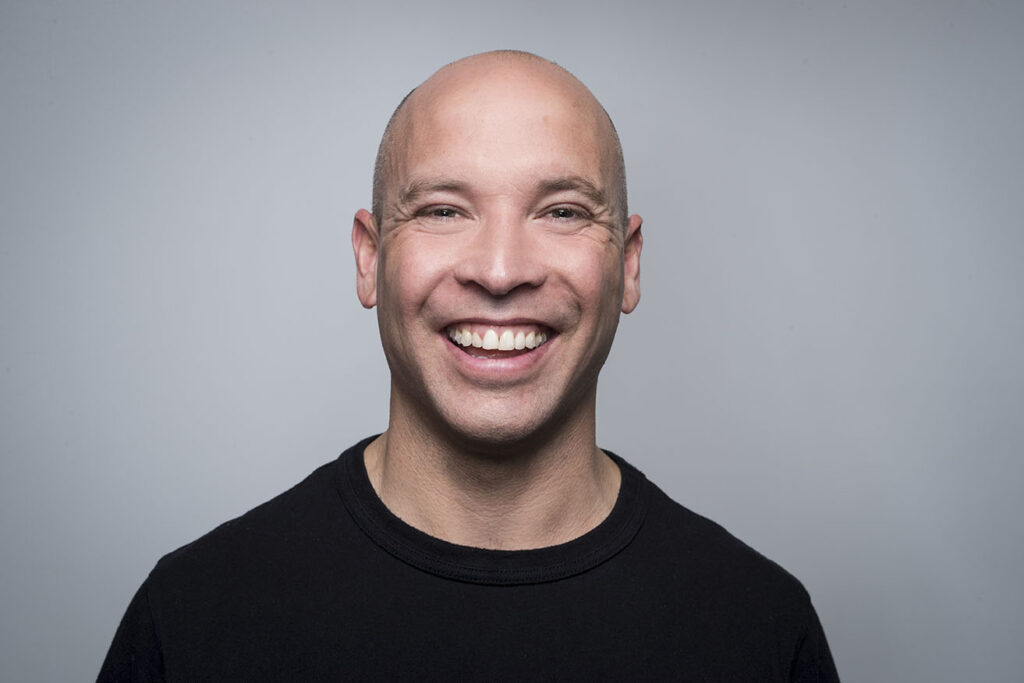 “Moedhart is a way of life. Going back to what feels good and having the courage to follow my heart.”

For much of my life I didn’t feel very connected to myself. I spent many years letting my head take the lead and made most of my decisions based on how I thought things should be. Coming from a successful family business, I had grown used to setting the bar higher and higher for myself to do the family name proud – not necessarily a bad thing, but that way of life often left me functioning on pure adrenaline and feeling more robotic than human.

When I first came into contact with the art of the Northwest Coast, it had an intense and powerful effect on me. Everything about it feels real and energetic. The nature, the stories, the wisdom, the craftsmanship; all of it made me want to go back to a more connected way of living. And even though I didn’t know exactly how at first, I knew I wanted it to play an important part in my daily life. So I dug in deeper and have since been privileged to meet many of the people behind the art – all beautiful human beings, abundant in both life experience and in knowledge passed on from generation to generation.

I can honestly say opening Moedhart Gallery was not a rational decision by any means – it came from doing what feels good. For me, it is the start of a new journey in which I am learning to listen to my heart and carve out my own path in life. Maybe that’s why every time I enter our gallery space it feels like coming home; it’s a very special experience to surround yourself with the beautiful energy every object in here holds. Being here never fails to remind me:

Allow yourself the space to live your own life, listen to your own voice and go at your own pace.

I look forward to meeting you and to you meeting our art, 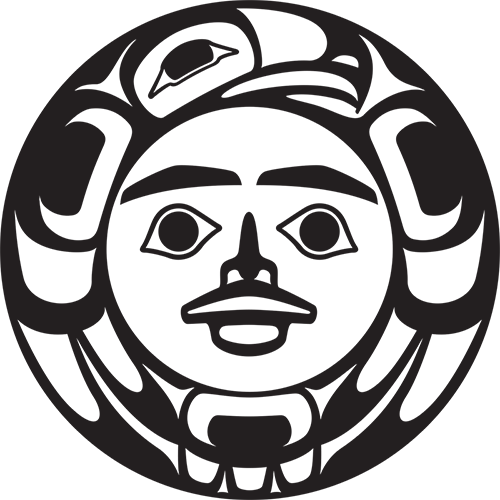 In March 2019, we travelled to Tofino, Canada. A popular summer tourist destination in the summer. It attracts surfers, hikers and all kinds of nature lovers. For us, the attraction was also the Roy Henry Vickers Gallery.

On our first day in town, we walked through the village and saw an announcement for a storytelling meeting taking place at the gallery the next day. To our great pleasure and surprise, it turned out that Roy himself was the one who was coming to tell his own story. It seemed like a sign. We followed it and returned the next day.

Roy turned out to be an inspiring person for us. He is beautifully close to his emotions. For us, this is also the power in his way of telling stories. His stories are the foundations of his art. You don’t just want to listen, you have to listen. It affects you.

We kept in touch with Roy. So when we decided to open a gallery of our own, it seemed only logical to ask the man who had inspired us to design our logo. Roy understands the intention and meaning of Moedhart and created a design to represent us: the eagle surrounding ancestors.

“The eagle surrounding ancestors. The ancestors communicate to all people in the world. It is the face of a woman and speaks to the family of humankind. We all descend from one matriarchal gene, the ‘Eve Gene’. We speak of our ancestors who call on us to walk in strength, truth, and beauty.”
Roy Henry Vickers, May 2019

For us, the indigenous art of Canada’s Northwest Coast is a portal to a world guided by inner wisdom, rich in symbolism that has inspired humankind throughout our existence. While reminding us of stories so primal and universal that we can place them in the context of our own lives. It’s all about what connects us as human beings and how you can use this to reflect on your own story.

At Moedhart we bring attention to these stories of the world through art.We call it ‘the art that sells the world’.

The world is based on everyone’s own truth. If there is an overall truth, then we believe it would be that of the primordial man close to nature. Beautiful in its simplicity and embracing of nature.

In today’s world we are distracted by all the possibilities modern technology offers us.

More than ever, things are on display. Almost everything is for sale and we can bend the laws of nature. Nowadays, our storytelling is mostly on social media; we are branding a company or branding ourselves. At Moedhart we do not condemn this; we are also online and enjoy modern possibilities. In fact, we believe beautiful things and connections can come of this.

If the world is about ‘selling and telling’ stories, then Moedhart wants to ‘tell and sell’ by means of art. The art at Moedhart shows symbolism of ancient human myths, cultures and themes. The art stories ‘tell and sell’ the primordial world back to our current fast-paced world.

Our motto is a nod to the song ‘The Man Who Sold The World’ that was written and performed by David Bowie (and covered by Nirvana). In the BBC Radio 1 programme ChangesNowBowie, broadcast in January 1997, Bowie spoke of his inspiration for the song:

“I guess I wrote it because there was a part of myself that I was looking for. Maybe now that I feel more comfortable with the way I live my life and my mental state and my spiritual state whatever, maybe I feel there’s some kind of unity now. That song for me always exemplified kind of how you feel when you’re young, when you know that there’s a piece of yourself that you haven’t really put together yet. You have this searching, this great need to find out who you really are.”

Online, we found the following on songfact.com (April 2019): “This song is about a man who no longer recognizes himself and feels awful about it. For years, Bowie struggled with his identity and expressed himself through his songs, often creating characters to perform them.”

For us, the lyrics suggest the person in the song thinks he has an encounter with his double. The song tells the story of a person who sees a man on the stairs. A man who wasn’t there before and wishes he’d go away.

We believe Bowie, the man ‘who sold the world’, who made the world believe in his created characters, is confronted by his former self – his more authentic self – on the stairs.

To us, this story isn’t about becoming somebody, but about realising who you are already.

“Life isn’t about transformation or becoming something or someone. It’s about realising what is already within you. Accepting and embracing your inner self, your intuition, your inner wisdom.”

Moedhart desires to spread the appreciation of the native art of the Northwest Coast of Canada internationally. Moedhart would be honoured and grateful to play a modest part in this.

It is not only about physical art, but also about the stories, inspiration and artists that bring the physical piece of art to life. Moedhart wants to share art and meaning with a regard for nature, culture and artists. Respect for the rights, dignity and integrity of others is essential and is indispensable to the Moedhart mission. Trust and trustworthiness go hand in hand with how we conduct ourselves. We expect our actions to be consistent with our words, and our words to be consistent with our intentions.

We champion freedom of expression (and art form) and acknowledge that people’s opinions can differ from each other. We embrace human and intellectual diversity and inclusiveness.

Moedhart puts energy into gathering sincere information, but knows that this is in a subjective manner. It is never our intention to offend anyone. If you believe that information or any other content found on the Moedhart website is not shown correctly, please do not hesitate to contact us. Make us wiser, so we can share more knowledge with others. In other words: at Moedhart we may make incorrect assumptions, but we are open to look again and to learn. We invite you to help us and to do the same!