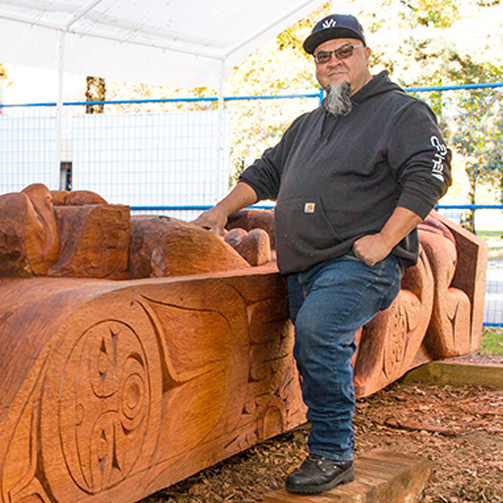 The bear has humankind qualities, e.g. physical characteristics like the ability to stand on two legs and nurturing young. But there is also a legend story about a First Nations chief’s daughter fell in love with and married a Bear. She gave birth to twin bear cubs and was known as the Bear Mother. This happening created the close relationship between Bears and humans, according to the story. In general you can say the feeling of kinship makes Bear a link between human and animal kingdom (nature).

Bear is associated with supernatural, because he is savage and has great strength. Bear is seen as a guardian and a protector (of family and of the animal kingdom). He can help spirits of warriors (leaders) for instance with courage and strong will. There is a contrast with beer. He is the protector of family, but he is also an independent einzellganger. Bear can even seem distant with little need for fellowship.

Gerry began his carving career in 1988. Both Henry McKay, an artist who is a member of the Nisga’a Nation, and his brother, Roger Swakium, were instrumental in teaching Gerry the basics of carving wood. Gerry is a versatile artist who carves ceremonial masks, rattles and totem poles. You can see his depth and his attention to detail in all of his art. Gerry uses alder, red and yellow cedar wood as his preferred mediums.

He attended the fine arts program at Langara Community College for a two year term as well as Emily Carr School of Art for an additional two years. Gerry also took a jewelry making course at Vancouver Community College. Since 1998, Gerry has been mentoring young artists while creating works of public art himself. Among these projects are the gateway for the Collingwood Neighbourhood House and a 21-foot totem pole for a housing complex in Vancouver, BC.

In 2017, Gerry became an artist-in-residence at Vancouver’s Skwachàys Lodge. Gerry is currently the artist in residence in Maple Ridge, British Columbia, a position he will hold until 2021.

Gerry has led a turbulent life. Gerry has gained new insights in his life; his inner truth. He now leads a simple and withdrawn life, where everything revolves around being grateful and content with everything in life. For us, he is a generous and proud man who is really passionate about carving the BIG pieces (like totem poles). 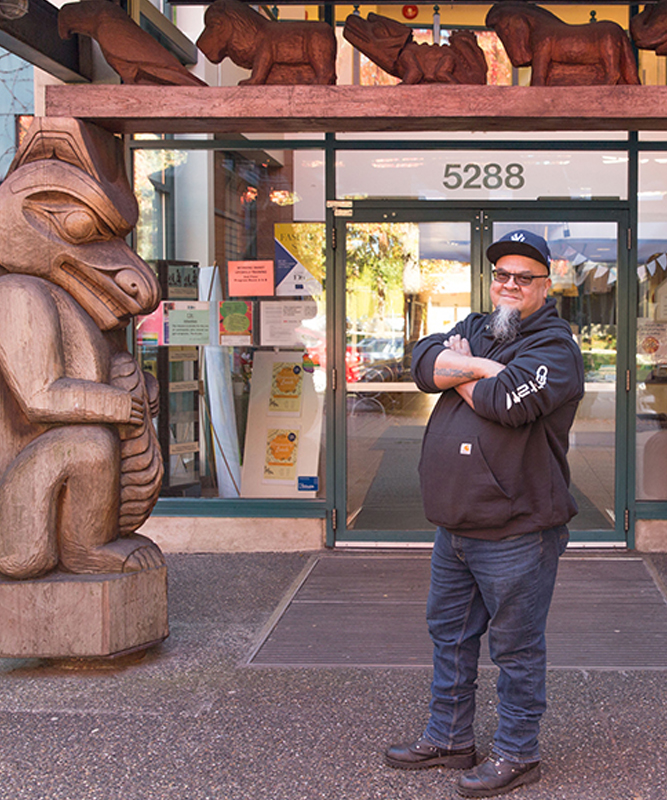