Sisiutl and Thunderbird, by Cole Speck

Thunderbird lived on top of a mountain called K̕akita̱n at the same time that K̕wa̱mgila was living on the other side of the inlet at a place called Kwa̱nwadi, on the right hand side of Knight Inlet going out. K̕wa̱mgila had a terrible time due to constant rain, hail and thunder. It was always too rough to fish or hunt. This Thunderbird was called T̕suna and was the cause of this bad weather. Now T̕suna had six children, five boys and one girl. He said to his wife, “It is no good stopping on the top of this mountain any longer. It is too steep and the children might fall down and get hurt”. So they moved one-half the distance down the mountain to a place called X̱wix̱awi and lived there for some time. T̕suna thought he was better off here, but would be better still nearer to the saltwater at a place called Wadzolis, close to a salmon creek. Here T̕suna caught and dried a lot of salmon and when the salmon had stopped running there was nothing more to catch. Now he saw in the sea a lot of half dead old dog-salmon and said to his sons, “There must be a river near here, whence these fish come, let us go and see”. So they put on there Thunderbird clothes and then thunder and lightening came and they flew across the inlet and came to K̕wa̱mgila’s place where they saw a lot salmon in the river. T̕suna went back home and said, “We had better move to this river”. So they caught a lot of Sisiyutł and crossed over in five Sisiyutł canoes full of Sisiyutł. As soon as they reached the shore one of the sons spoke harshly to K̕wa̱mgila and said, “What are you doing here in my river?” K̕wa̱mgila answered and said, “Don’t speak so harshly to me my brother. Just say where you want to build and I will give you the land for a house. Now go half way up the river and build at a place called X̱omils. Wait here for the time until high tide and you will be able to get up over the hill.

So T̕suna waited, but got tired and took the canoes with his sons and they got over the falls easily, cutting through the rocks. To this day the First Nations never tread on these rocks. Their wounds would never heal up.

At last they reached the place and they built a house. Before they went up K̕wa̱mgila had said, “Look out for our two sisters, whose place you will pass”. One was called X̱wilka and the other was called X̱oga̱mga and they said, “Good” and did so. He went past them and built the house. From that time K̕wa̱mgila and T̕suna were good friends. Now the two villages rapidly increased in population, T̕suna being the Chief of his own tribe. Around this time T̕suna, now being a man, dreamed his one son and daughter returned to the mountains after being told by T̕suna not to make any more thunder except in cold weather, like in spring or winter or when any of his people die. Thus it happens even to this day. When any T̕sut̕sa̱na people die there is thunder, for this is the name of the descendants of T̕suna. 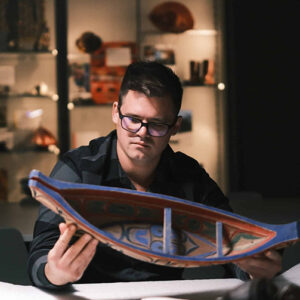