Known as “Lord of the Ocean” or “Wolf of the sea”, Killer Whale – Orca – is said to be the guardian of the ocean. Seals and dolphins are his helpers. It is believed that Killer Whale feels connected to humankind. There is a story about when Killer Whale is in his deep under sea home, he will take of his skin and lives like a giant human. Also there are stories of Haida ancestors putting on Killer Whale skins to enter Spirit world so Killer Whale ‘people’ and humans can visit, communicate and feast together. Some people believe that Killer Whale will purposefully take down boats to come closer to their beloved humans.

On the other hand there are stories about Killer Whale who guides people who are caught in storm or lost at sea. It is said he will protect those who travel, and will savely lead them back home when the time comes. Some Art depictions include therefor a human figure, clinging to the dorsal fin.

The Native Orca Symbol or Killer Whales symbolizes family -togetherness-, loyalty, dignity, harmony, longevity and protection. Killer Whale is like Wolf. He raises each offspring with care and travels in family groups, working together to protect all members of their pod. There are stories about his close relation to Wolf. Both are admired for their hunting skill, strength, intellect and devotion. Some legends say Wolf has the ability to transform in Killer Whale (and vice versa). Some call Killer Whale “Wolf of the sea”.

For us, Killer Whale – Orca – stands voor a feeling of belonging and deep connection. It is about the believe of having a strong base you can always trust upon (and go back to).

Trevor Angus (Tka’ast)(1970) grew up in the town of Kispiox, British Columbia. Trevor carved his first plaque in fourth grade under the instruction of Victor Mowatt.  Daniel Yunkws was also a teacher of his during this time.  His school craft teacher inspired him enormously. He pointed out the potential in Trevor’s work. 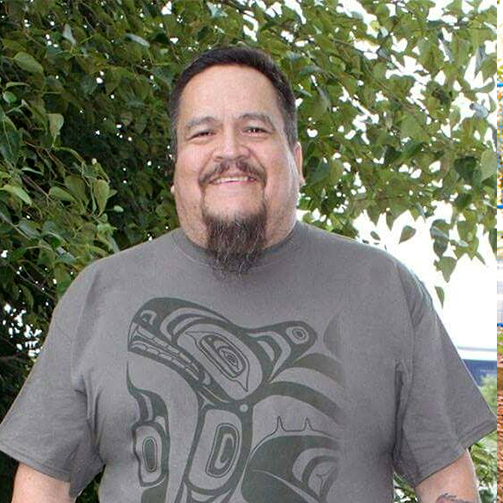